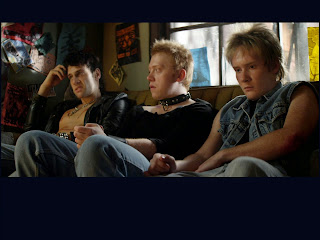 USA Today (today's issue) presents a article of CBGB, the film about the famous music estasblishment which stars Rupert as Cheetah Chrome, one of the Dead Boys members. In the article there are two new images of Rupert, one left, another in our galleries (which we are re-organising to reflect different prjects so bear with us).

There are also numerous quotes, which Rupert Grint US have kindly posted on their twitter:

“I have always wanted to play a punk,” says Grint, 24, who stars as rocker Cheetah Chrome in the historical drama CBGB (opening in limited markets Oct. 11). “It was really good fun.”

Rupert had this to say about playing on stage: “It was a real buzz. We actually felt like we were in a band, which is something I have always wanted to do, secretly,” Grint says. “It was nice to have a little taste of that.”

Rupert Grint says that on set, he rubbed shoulders with actors playing Iggy Pop and a young Sting. "It was surreal." #cbgb From a world famous actor who has rubbed elbows with major actors before.

"We just played the music really loud, and we'd just go for it. And we'd get into all sort of disgusting things. It was a real buzz." #cbgb - Rupert Grint on he and Justin Bartha playing in the club!

Grint, a fan of the music, says he also loved the fashion. Even the dog collar. "Weirdly, I kind of got used to the collar. I kind of felt naked when I wasn't wearing it."

Rupert Grint became a fan of #thedeadboys while filming #cbgb. "We saw videos of these guys at their peak, and they put everything into these shows," he says. "It was almost inhuman."

Rupert Grint says Cheetah Chrome was on set for 'CBGB,' in which has has a cameo. "I spent a lot of time with him," Grint says. "He had loads of stories. I could sense the passion."

#cbgb Stana Katic (as Genya Ravan) eyes Rupert Grint (as Cheetah Chrome) at the bar. Their on-screen professional relationship implodes because of the chaotic personal nature of The Dead Boys.

You can read all about the film and the soundtrack, which mixes the real songs with the voices of the actors, here. The album can be pre-ordered here.

UPDATE:
RG.US have updated their info on this article, saying that Rupert also talks about Mojo and states that he doesn't chose such extreme roles to "shock people or make a big statement, It’s just part of moving on.”
Posted by Admin, Niamh, Danaholics Anonymous at 12:41 PM

Admiring the time and effort you put into your blog and in depth information you provide.

It's awesome to come across a blog every once in a while that isn't the same outdated rehashed material.
Great read! I've bookmarked your site and I'm including your RSS feeds to
my Google account.

Thanks for the lovely comment! It comes much appreciated!