March/April 2015:
Hey guys! We promised a competition back in September when we turned 9 but as funds were low it didn't happen. Now we're a bit richer, thanks to a new job for our admin, which although it limits the time that can be spent posting, it means we can offer a few prizes and not just one!
The catch, my friends, is that we want you to help promote a fan film we've been supporting and ourselves of course a little. Here's what you have to do:
Make sure you're following us here and like us here.
Tweet the link to Mudblood: Book of Spells donation page, including us @DanaholicsAnony and @MudbloodM
Then tweet that you've entered our competiton with the link to this page!
It's that simple.

Prize one is a copy of Horns, the book, by Joe Hill.
Get entering!


UPDATED:
Samantha was our winner of HORNS, by Joe Hill, congrats Samantha!
For our May Prize, we will be giving away J.K. Rowling's Harvard speech, Very Good Lives, which is in aid of Lumos. This time you can win by retweeting our tweet or sharing our post on Facebook.
Make sure you're following us or like us! 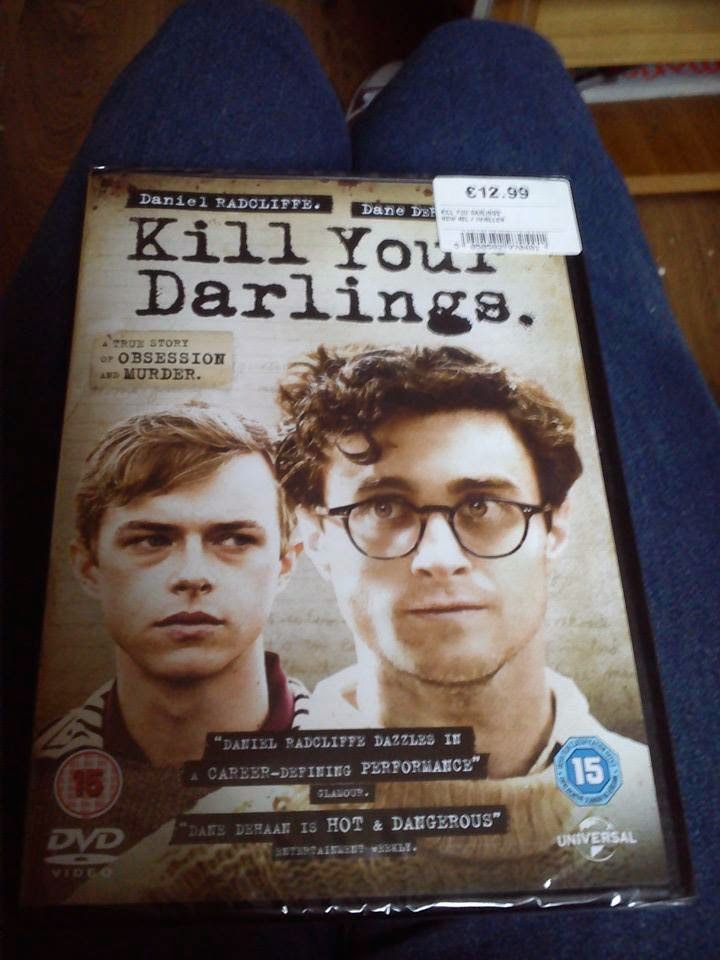 In honour of Harry and Dan's birth month, and indeed the 17th anniversary of Philosophers Stone, we have a copy of Kill Your Darlings (Region 2) to give away!
All you have to do for a chance to win is mention us on Facebook or Twitter. On Facebook start typing '@Harry Potter News-Danaholics Anonymous' and we should pop up. On Twitter we're @DanaholicsAnony - you can mention the competition or just comment on our online presence, be it blog, Facebook or Twitter.


UPDATE: And the winner is....
Pauline!
When we notified Pauline she was very happy:


Summer 2014:
We're beginning to reach some of our follower and likes targets and want to reward, you the fans, for getting us there!
Just this March we awarded Dan's Guardian Mag spread to the fan that liked and RT'd our competition the most, Stacey was our winner and here's her response:

and now we have another competition:
For the person(s) who gets us to 410 followers (by suggesting us to that person and/or that follower) will receive the newest fan picture Dan sends out signed!

Summer 2013 Competition:
With our 7th birthday swiftly approaching this September, and 7 being a magical number, I've decided to run a bigger than ever competition. Beginning in the summer with tidbits such as posters, keyrings and stickers, there'll be more substantial prizes to come including books and whatever else I can lay my hand on!

UPDATED (again):
so far we have to given away from our prizes :


And I havent finished! So do you want to win some prizes? Each prize will be tweeted and posted on Facebook and alll you have to do is RT or like it to win! Not exactly Lumos's prize giveaway, but not bad eh?

Our most recent prize, and biggest yet:

6th Birthday Competition:
For our 6th Birthday, we're holding a very random competition. We will be posting random questions at random times on both the Facebook and twitter and the first person to answer the question in EITHER place wins the designated prize.
Random Dan-related questions will win you a Danaholics exclusive framed picture of the man himself(taken by our lovely friend Kellie M).
A specific question will be asked for more specific prizes that will be announced shortly.
The first prize and question were posted a few minutes ago...AND I BELIEVE THAT WAS A RECORD! In a mere two minutes we received an answer! Congrats to @TFEULive!
Vanessa from Germany receives a copy of Kate Mosse's Labyrinth, of which the TV show adaption will star Tom Felton!
She responded via twitter on receiving her book in the post:
"it already arrived today! Thank you so much! :)"

Stay tuned for the next question!
UPDATE: 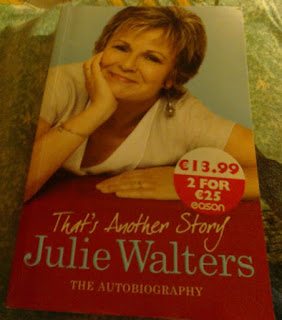 We set up Julie Walters' biography as the second prize and put out this question on 18th October:
Want to win JULIE WALTERS biography?Then answer this question first: Which film,costarring Michael Cane,did Julie film in Ireland?
We gave a few clues: This film is often quoted as the film to 'make' the young actress and was made in 1983. Many parts were filmed at Trinity College Dublin.
We admitted it was a tough one and eventually replaced it with this question:
Julie Walters is best known playing Mrs Weasley. What infamous line did she say to Bellatrix in Deathly Hallows p2?
It was close, but Marissa , @MarissaHendrikx won!   We'll be sending out that prize shortly. We also offered the close second, Melissa a consolation prize of a framed picture of her favourite cast member from the Deathly Hallows Part 2 premiere. She selected Emma Watson.
UPDATE:
Marissa has now received her prize and Melissa is confirming which picture of Emma she would like. Marissa tweeted:
"got my book today :) thanks so so so much! ps loving the note "special Danaholics mail" and the message inside! Thanks so much :)"

Update:
Our third question concerned the trio and what age they were when they were cast. Our winner was Lucy from Peru (@Lucy_me90). She selected an image of Dan. One of our favourites!

Previous Competitions:
In the past, Danaholics has run several competitions for it's followers.

We may be a small community, and we may have limited funds due to the non-profit nature of the site, however, we appreciate every single person who clicks onto our website and follows our tweets, so we like to show that appreciation every couple of months.

This was the first competition we ran and considering our small following at the time, it was rather successful.
Below is the text of the details posted November 17th 2010:

I have a few Dan and Harry Potter related things lying about, and you guys are so good to me, i thought i'd run a competition so that whoever should be the best follower would get these few goodies.
I shall be uploading pics of said goodies soon, but in the meantime here is the way it works;
Follow=1 point
Follower for more than 6 months=2 points

Retweet= 5 points
FF= 7 points
a reply to a post= 8 points
a reply on my actual blog=10 points
If you recommend me directly to a friend, I will give you 11 points.

AND THE WINNER IS.....
*drumroll*
@Rooobiindv! By a mere 2 points!
Wow tight competition there! @rooobiiindvz got 116 points and @RoomofRadcliffe got 114. Congrats to both and all followers. X

Her response: "OMG, I am the greatest follower of @Danaholicsanony! Thank you so much!<3 br="br"> 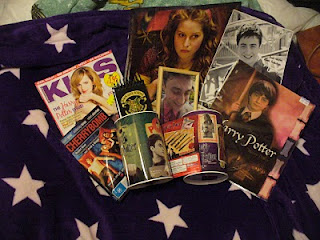 January of 2011 we ran this competition. At first it was rather complicated, I admit, with a points system, but I wanted to offer as many ways as possible to get involved.

Here is a summary (from an old post) of the prizes: 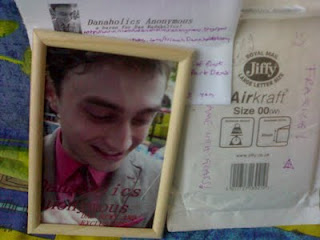 So, to roundup;
1st place; @DanRad23, who won the framed Dan picture, sent over the image left when she received it. Her initial response was: "Wow...you're gonna send me the prizes...wow..I'm so excited."

2nd Place; @Blushiee
She tweeted: "I just won a prize for the HP's contest.To all the Potter's fans out there, FOLLOW  @DanaholicsAnony.. For more upcoming issues & contest".

4th Place was also a tie between @FrankieDanhp and @LauraB1993 and they both got an offer of a set of Harry Potter file dividers! Laura, who I later befriended, refused the prize so this carried over to the most recent competition last Christmas.

Greatest Follower 3;
This was the summary online

"DANAHOLICS ANONYMOUS WILL be attending the London leg of the next premiere run, for Deathly Hallows Part 2.
So as part of our latest competition, which you have 2 weeks and 3 days to enter, you will not receive a physical prize as winner, but will have your question asked to your favourite member of cast, exclusing Emma Watson as I never manage to meet her."

In the end, we received no questions, so there was no winner.

Before last Christmas, we announced our 10 Days of Christmas, and it went quite well. Aside from Day 9, we received winners for each day. This was the summary of the competition:


To celebrate 10 years of Potter/you lovely people/5 years of Danaholics and more I decided to run a Christmas competition; and here it is:
Every day for 10 days, the best of you will be randomly chosen (if you don't want a gift, just say so and we'll pick another) as a TRULY GREAT FOLLOWER, and will get to choose a number between 1 and 10 to receive a random Harry Potter prize!

Day 2's winner was; @DanRadExaminer, They picked the number 3, which gave them a choice between two prizes, from which he selected a framed picture of Daniel Radcliffe, taken at the Half-Blood Prince Premiere.

Day 6's winner was: @Debbie_Chesney. Debbie,who knew what she was getting and RT'd for her prize of a Half-Blood Prince poster-=Congrats!
She contacted us saying: "Thanks so much and I love your site too."

Day 8's winner was @DublinGirle who won a selection of stickers,postcards and tidbits from the series.
Andrea sent us a lovely message when she received her prize: "Hi niamh, just wanted to let you know i received your post. Thank you very much."

Day 9 and 10 got no response we quit while we were ahead. 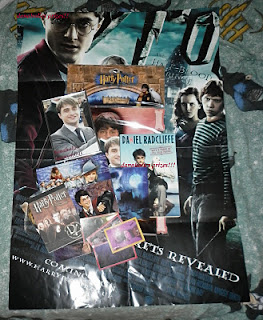 The responses here will be updated asap! In the meantime, here's an image of the kitty for this competition.


We also ran an open invite for questions for James and Oliver Phelps when we exclusively covered their Lifetime Membership of Law Soc UCD presentation. A fan named Laura asked a question pertaining to their plans for future films and in particular to Oliver Phelps' participation in Latin Quarter, which never materialised.
I am currently rooting out the audio from that event and will update soon.

Although it is by no means a competition, we were also asking for questions for Rupert Grint, Bonnie Wright, Evanna Lynch and Tom Felton at the Grand Opening of Leavesden's Studio Tour,of which we received none before the closing time.