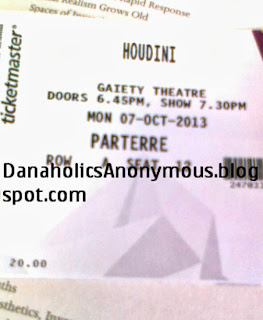 As we previously reported, Evanna Lynch is to star as Harry Houdini's wife and assistant Bess in a traveling theatre show entitled Houdini this coming autumn/fall. Evanna has spoken about her first foray into theatre recently, among other things with The Irish Poet.  Some snippits are below, thanks to Magical Menagerie whereas the whole article can be read here.

“It’s the elements they combine, there’s amazing story, the drama, the tension between the brothers and Houdini’s wife. Plus, they’re doing all of the illusions, you know, they have some vanishing acts so it’s gonna be so visual but also a story.”

It was the story — and particularly the feisty, strong-willed character that is Bess — that attracted Lynch to the role in the first place. “He [Harry] called her his lucky charm and I think it’s so interesting to explore the minds of these people who were in the background, who were supporting these people who become our idols,” she says.

So no apprehensions about the role then? “I guess I’m apprehensive about the casting of Harry (Jamie Nichols has since been cast in the role) because they [he and Bess] have such a unique relationship. They were inseparable,” says Evanna.

“They were two vagabonds just travelling around and they went to England and they went to Germany and it was just them and so to have that bond was so…” she pauses to look at her phone, which buzzes once more on her armchair. “I think it’s important like, obviously, not that I fall in love with this person, but just to feel [something]. Yeah. So I hope that goes well and I guess I’m nervous of going on tour,” she adds of the play set to tour across Britain from September, before finishing with a set of dates at the Gaiety Theatre in Dublin in October.What are your thoughts about the first night of the first live show, I ask. “Oh my gosh, yeah. I don’t know,” says Evanna. “I am nervous about that, but hopefully all the rehearsal will help ease those nerves because yesterday, for the auditions, I was watching auditions all day and then I had to get up and I WAS SO NERVOUS. I was freaking out. So I hope I can overcome that and it won’t get in the way.” 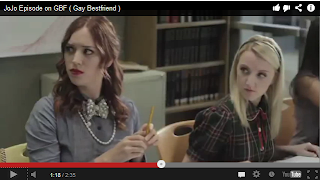 We'll be attending the Dublin opening night, front row centre, so we'll be posting a review around 7th/8th October! For more info check out our earlier post!

In other Evanna news, her main post-Potter role so far, in teen comedy G.B.F. is to screen in the UK at next year's Birmingham Shout Festival. No word yet on a date or even a month, but we'll keep ya posted!