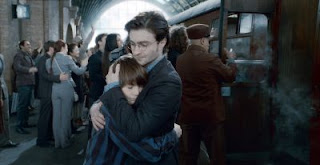 WARNER BROS sent the following statement to Snitchseeker regarding their previous post about Harry Potter dvds being removed from shop shelves next year;
"Even though there could be a sense of urgency from the consumers’ perspective, there will be Potter product come the first of the year,” says Jeff Baker, senior VP and general manager of Warner Bros.’ Theatrical Catalog.

“But over time, they’ll be less and less of that inventory. At some point, whether it’s next April or May or June or July, it’ll probably be very difficult to find Harry Potter product, especially if you’re looking for the third movie or the fifth movie, for example.”

“The idea is not to let Harry Potter dissipate. There are exhibits around the world. There’s the Harry Potter World [i.e. The Wizarding World of Harry Potter] in Orlando,” says Baker. “There are a lot of things that are Harry Potter that are going to be available to consumers well into the future, and we certainly want a home entertainment component to those grand plans.”

“There is discussion internally about aggregating assets from all of these films over the last decade and adding some new things — we’ve never done an Ultimate Edition on the final two films — and doing some grand kind of piece,” says Baker. “It could be the end of 2012 or the beginning of ’13.”

To brighten up this grim post, I will include a new promo to the top left, courtesy of Magical Menagerie. The rest can be found here.
Posted by Admin, Niamh, Danaholics Anonymous at 5:33 PM