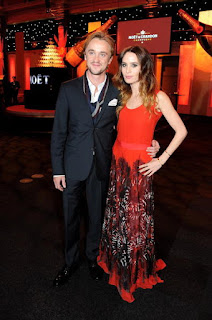 Tom Felton tweeted yesterday that he was all ready to go to the BIFA, or British Independent Film Awards and we let you know that he would be attending. Feltbeats tweeted about the event as companies like Getty Images began to post images of the actor with his girlfriend Jade at the event and they have now posted a full report which can be viewed here. Here we shall give a brief summary.
Left is that aforementioned first image and many more can be found in our Tom Gallery here.

The event celebrates independent film and was held in Old Billingsgate Market, London.  During the event, Tom also tweeted congratulating Michael Gambon on his special award! Snitchseeker reported further on this saying that he has received, ironically, the Richard Harris Award. A picture of him posing is right!


A video interview of Tom can be found below: 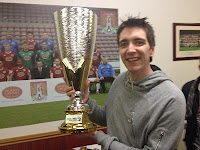 We previously reported that James and Oliver Phelps were to take part in a football match in aid of Africa sponsored by William Hill and this took part last night.
The boys enjoyed the game with Oliver tweeting:


Awesome time today at the #williamhillfoundation match. There's only one think that mattered. #winning

He also posted the image that is now left. The key organiser in the event, Robbie Savage also tweeted that their team won 4-3. WELL DONE LADS!