Emma Watson has begun doing the rounds for her upcoming biblical epic release Noah and she recently attended the Berlin premiere of the film. An image of Emma is now left (more in the Noah album).

In other Noah news, a new trailer has been released and Emma can be seen introducing it below:

While doing the press rounds, Emma took part in a chat in which she spoke Noah, the upcoming Queen of the Tearlings (an adaptation of the book released in July and produced by David Heyman) among other things. Check it out below:

In other promo, a featurette which shows how the film was made, is now below:

Finally, Emma will grace April's Elle Magazine's cover and some images and quotes have emerged from the issue. All images are in the gallery while the cover is right and quotes are below: 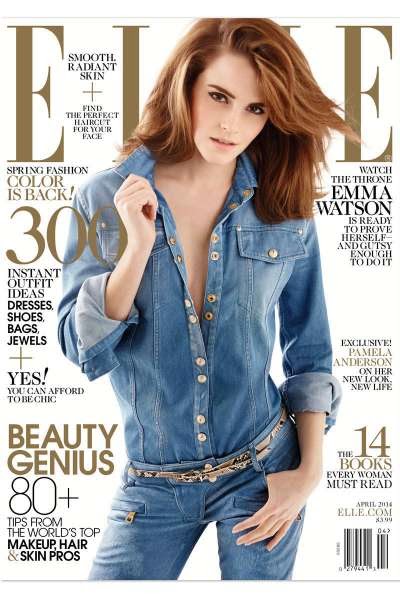 Emma Watson on the importance of having a life outside of her acting career: “I remember reading this thing that Elizabeth Taylor wrote. She had her first kiss in character. On a movie set. It really struck me. I don’t know how or why, but I had this sense that if I wasn’t really careful, that could be me. That my first kiss could be in somebody else’s clothes. And my experiences could all belong to someone else.”

Emma Watson on coming of age in the public eye: “There are all these actresses who have emerged in the last year or two, and they get to emerge as this complete human being. And I’m so jealous!"

On Noah, Darren Aronofsky’s $125 million dollar blockbuster, and what it was like playing Noah’s adopted daughter, Ila: “It’s Shakesperean, what happens to this family when they’re put in this confined space for 40 days and 40 nights. It’s the end of the world – how these different human beings are dealing with the impact of that. Are humans good? Are we bad? All of these themes are epic.”

Darren Aronofsky on Emma’s steely nerve while filming Noah: “We started off with one of Emma’s hardest scenes. We shot in Iceland on a beach with an extremely difficult weather situation. The force of the wind – we could barely hear the actors. The sun kept coming in and out. We had to wait for the right light, then, Go, go, go! Then, Wait, wait, wait! She was able to block out all those ridiculous external forces and just focus on the emotion at hand.”