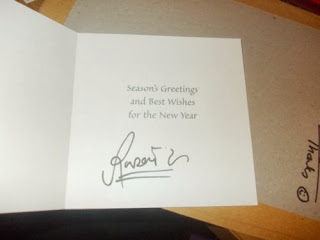 Rupert Grint Us are reporting that a Christmas signed by Rupert Grint has gone up for auction for charity on Ebay and currently stands at £31.00/ $50.74 with 3 days, 21hrs left. Bid on it here.

In other Rupert news, he and Daniel Radcliffe have received nominations for their recent stage acting, Rupert for his continued role in Mojo and Daniel for his 3 month run in The Cripple of Inishmaan. The awards, at the Whats on Stage Awards 2014, are as follows:

London Newcomer of the Year:
• Jack Huston - Strangers on a Train at the Gielgud
• Kyle Scatliffe - The Scottsboro Boys at the Young Vic
• Olivia Vinall - Othello at the National, Olivier
• Rupert Grint - Mojo at the Harold Pinter
• Tori Amos - The Light Princess at the National, Lyttelton

Glad to hear they're not up against one another! Vote here.


In other awards, the Golden Globes and the Screen Actors Guild Awards have announced nominations and some Potter cast and directors are among them!