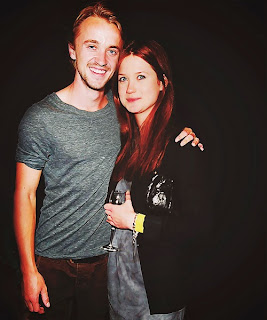 Mugglenet are reporting that Bonnie Wright is to make her West End debut in The Moment of Truth. The play , by Peter Ustinov, "deals with the mechanics of toppling governments, the pretences of war and the power of propaganda" and Bonnie will star as 'the girl'. The play will run starting on June 26th, but officially open June 28th and go until July 20th.

In other casting news, Tom Felton has been cast in a show for the Audience Channel  called Full Circle:


When DirecTV’s new original drama “Full Circle” debuts on the Audience Channel in the fall, some people will see it as screenwriter and playwright Neil LaBute’s TV debut. But others may see it as a chance for Angel and Draco Malfoy to team. Both “Angel” and ”Bones” star David Boreanaz and “Harry Potter” alum Tom Felton have been announced in the cast, but don’t expect a typical ensemble effort.