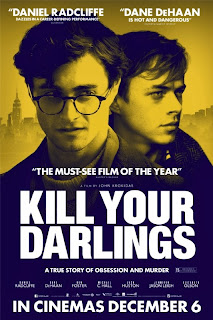 Empire Magazine have revealed a brand new Kill Your Darlings poster for the film's UK release. Check it out left.

In other KYD news, following the opening of the Kill Your Darlings Cutout Art Exhibition competition, you can get more info by joining the event on Facebook here.

In other new images, DanRadcliffeNL have posted some new Toronto Film Festival portraits on their Facebook here and here.

Finally, a new interview Daniel did with George Stroumboulopoulos last month has just appeared online and can now be viewed below with thanks to DanRadcliffe.co.uk: