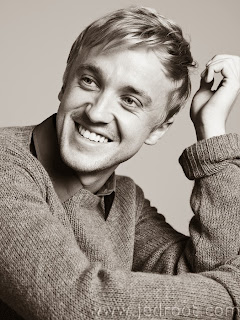 Since we last posted on Tom Felton, Full Circle has been released in full (10 episodes) on DirecTv.
On that note he has done some more interviews about the show which I will detail/summarise below.

Firstly he interviewed with IamRogue.

IAR: To begin with, Full Circle is a very unusual TV project. Were you sold on doing it once they told you that Neil LaBute created the series?

Tom Felton: I’m glad someone asked that because that’s pretty much how it was. I had said to people for years that I’d love to do some really high quality TV and my agent brought me this and said, "You’re doing it." But as soon as I heard that Neil actually wrote it I was pretty keen. In fact, after reading the first few pages I really kind of got to see the quality of it. You don’t want to be going into something like this where the dialogue is not first class and I think this is about as good as it gets, so that really lends itself well when you’re doing something like this.

In what way was it a challenge?

Felton: Several. The first one specifically was remembering exactly all the dialogue because I had never done anything like that as far as performing that amount of dialogue in one day. It was pretty much the ultimate contrast from filming on Harry Potter where you might be lucky if you got ten seconds done in a day. So suddenly we’re shooting 25 minutes of footage, and there were no real scenes. We start at the beginning and we ran it all the way to the end and we did that like 50 times with multiple cameras shooting. That was the first challenge I think, which was just the sheer intensity of the surroundings. The other part of it was that I didn’t meet Minka (Kelly) until two days before we started shooting. We hadn’t done any rehearsals, we had only done a couple of Skype reads together to try and familiarize ourselves with each other, but with something like this that is so heavily relied on chemistry we just lucked out. We got on very well, we were both on the same page at the same time, and we had a great director. He managed to get the best performance out of both of us.

Finally, in your post-Harry Potter career has it been difficult for you to find different roles and choose good projects?

Felton: No, it’s been great. I think people have kind of got the wrong end of the stick there about me having to shake a burden off or anything like that. That’s definitely not the experience I have or I’ve had in the last few years. People almost expect you to be the same character you are in the films. That’s kind of worked to my advantage I think coming into casting directors rooms and expecting me to be a wizard and I’m quite the opposite. So it’s kind of worked in my favor a few times I think. Harry Potter is something that I’m very proud of and I’m always ready to talk about it, but I am willing and hoping to do other stuff.


For those of us without DirecTv, there was a sneak peek clip on Access Hollywood:

In other interviews, you can read interviews with Tom with:
Collider
Crave Online
The Wrap

Another video interview from Nice Girls Tv is below, thanks to Feltbeats:

Finally, as we previously reported, Tom Felton did a photoshoot and interview for Issue 9 of Rollarcoaster (as we previously mentioned) and some new pics from it are in the gallery and one is above.
Posted by Admin, Niamh, Danaholics Anonymous at 1:54 PM