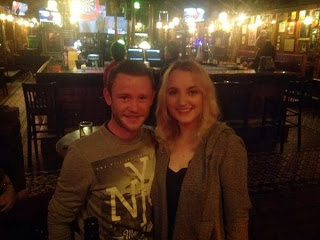 As we already reported, we attended the first night on the last leg of Evanna Lynch's run in Houdini.
Also visiting Evanna on the Dublin leg was fellow Potter cast and fellow Irishman, Devon Murray. On Evanna's performance he tweeted:

Was great seeing @Evy_Lynch last night in Houdini, her accent was amazing! We had a good catch up afterwards.

He also posted the image left.

Also on the Dublin leg, Irish entertainment show Xpose caught up with Evanna and you can watch that by clicking on the word Xpose above.

Another source reporting on Dublin, as well as London, was Snitchseeker.
In London, she helped unveil a plaque for Harry Houdini at The Hippodrome Casino.
In Dublin she posed for pictures with her co-stars Stuart Brennan and Jamie Nichols. Pictures from both events can be found here.

While tweeting, Evanna commented on Fantastic Beasts the movie and said:


even if I'm too old to play Luna, can I go through 10 hours prosthetics to play a crumple-horned-snorkack. Please??


Finally, there are two new G.B.F. images with Evanna in them, which can also be found in our brand new Evanna Gallery.
Posted by Admin, Niamh, Danaholics Anonymous at 3:16 PM