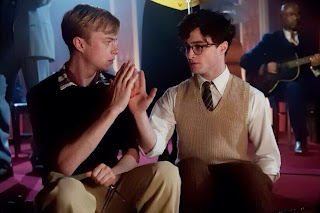 It's good news from Sony Classics if you're a Dan Radcliffe fan living in New York or Los Angeles:

A new promo,put up on Dan's Google+, from the film can be seen left.


A new interview with Daniel can be read at What's On Stage. In the interview he talks about his West End return in The Cripple of Inishmaan, Richard Griffiths and that Irish accent. Some snippits are below.

And, considering your Dad's Northern Irish heritage, was its setting an added appeal?

I don't know if it was an added appeal but it made the material feel less alien. All those conversations between [characters] Kate and Eileen - I've seen relatives talk to each other in that same, rhythmic way. There was something familiar about the characters that spoke to me. Even though it's a different vernacular and accent from where my Dad is from, my Irish connections made the idea of doing an Irish play less intimidating. My main concern was that Martin, when I came to the project, was all about the accents, and nobody is more paranoid about accents than me. But I do have a very good ear for them and I just kept thinking, ‘Well, even if you don't have it now, that accent is somewhere inside of you. It's going back a while but it's in there somewhere.' 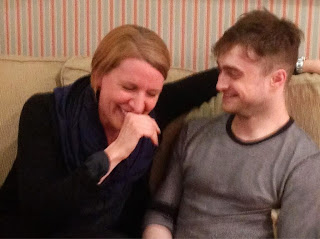 On preparing for the role physically.


After a lot of research I landed on cerebral palsy as being a viable option because there is a specific kind of cerebral palsy called Hemiplegia, which affects one side of the body and not the other. It's also a condition that can be apparent at birth. So then I had to learn about the mechanics of cerebral palsy and what that involves, why it affects the body the way that it does, and how people learn to live with it - they usually become incredibly skilful with their ‘good' side. I felt it was important to make his condition specific, rather than attempting some generalised ‘cripple' thing. To me, that is kind of offensive, to say, "oh well I'll just do something a bit weird", without looking into it at all. That's not doing justice to people who are disabled or to the character that Martin wrote.

Above right is an image of Dan after a rehearsal with an interviewer Susan Blackwell. More images can be found here and the interview can be read here.

A new video of Dan having some fun on Radio One can be seen below: