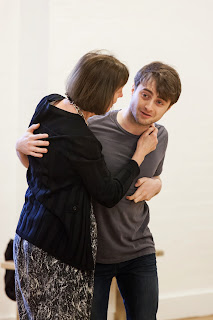 Mugglenet are presenting today some new behind-the-scenes photos from The Cripple of Inishmaan by photographer Marc Brenner. Check out one left (which interestingly displays his disability acting) while the rest can be found here. Interestingly his outfit is similar to what he wore in Equus...although this isn't his official costume.

In other promo, as we previously reported, Daniel did an interview with BBC Radio 1. Below are just some snippits courtesy of Snitchseeker.

What’s the first thing you do when you get home?

The first thing I do when I get home may sound pretty dull but I’m that kind of guy. I catch up on Pointless. I’m a big Pointless fan. There’s a lot of that to watch.

Pulp or no pulp?
Pulp.

From Karima: Daniel, if you were trapped on a desert island with the cast of Harry Potter, who would you eat first?
That is an interesting question. I think I might go with Michael Gambon. Only for the reason that we’ve been getting on each other’s nerves for years and winding each other up. So I think probably it’d just get to the point where he’d make one joke too many and I’d turn around and say, “Right, Gambon. I’m gonna eat you.” So I’ll go with Gambon on that, and I hope he hears this.

He also spoke to the Financial Times and the Irish Times.

Posted by Admin, Niamh, Danaholics Anonymous at 12:58 AM