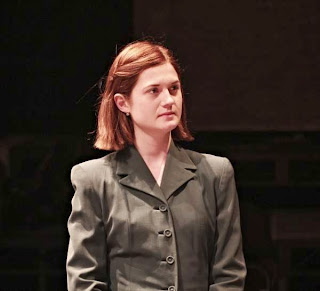 Last night Bonnie's debut on the West End officially began with the press night of The Moment of Truth. Left an image of the actress on stage can be seen, while more can be found in our 'Other Cast' gallery here.

The fansite Snitchseeker got the opportunity to send a representative along to the play and a review they wrote can be read here.

Whats on Stage also interviewed the actress and some snippets are below:

What drew you to the play?

Bonnie: Firstly that it was written by Peter Ustinov, who has always been a fascinating figure within the arts for me - he was a master of so many forms. Although written in 1950's, the themes are very relevant for an audience today.

Did you enjoy rehearsals?

Bonnie: My first few days I felt like I was speaking a foreign language, whilst trying to stay afloat in the middle of the ocean. But I am loving every moment of the challenge, every day I feel like I am evolving in some way. The rest of the cast have been fascinating to work with.

Do you identify with your character at all?

Bonnie: Not at all and that's why I love playing her.

What made you want to make your stage debut?

Bonnie: It has always been an art form that I have wanted to explore, and I feel that now was the right time professionally and personally to do it.

What did you learn from your Harry Potter experiences?

Bonnie: Everything. It was the foundation for my career.

Would you like to do more stage acting after The Moment of Truth?

Bonnie: After I finish the play I am going to have a short break in Italy. I then get back to London for the release of The Sea - a film I shot at the end of last year. I then have a few projects in the pipeline.

The show runs til the end of July and tickets can be bought here.