Daniel Radcliffe, The Woman in Black Wins at Empire Awards 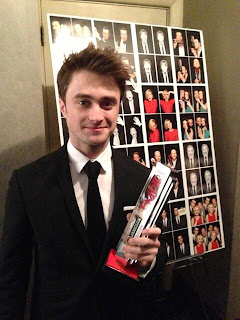 This year's Empire Awards were held last Sunday and Daniel Radcliffe walked away with Best Hero, two years after finishing Potter. His post-potter project The Woman in Black also won Best Horror. Having nominated the latter months ago I was very pleased! An image of Daniel with his award can be viewed left. About the win he remarked:


"Empire has always been very unpatronising in its coverage of Harry Potter and myself," says Radcliffe.

Glamour Mag said of it: "So pleased to hear Daniel Radcliffe has won #JamesonEmpireAwards Hero of the Year Award. He's such a nice guy. Well deserved!"

The full report on the award presentation can be read here courtesy of DanRadcliffe.Com.

At the ceremony, Daniel participated in the usual round of interviews, some of which can be seen below: