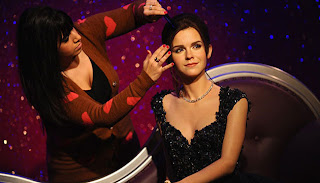 As we previously reported, Emma Watson was to be immortalised in Wax at Madame Tussands wax museum in London and this plan has come to fruition, reports Leaky. The waxwork, which i admit is very lifelike if a bit skinny, sits upon a "chaise lounge in the iconic tourist attraction, to allow fans to sit next to her."
An image of the waxwork can be seen right courtesy of Yahoo.

Feel free to drop us a photo if you visit wax Emma! Also if you want to read about the woman Emma portrays in Bling Ring, there is a small interview with the real woman in this week's Grazia magazine.


In other cast news, some more stuff about of Rupert Grint in upcoming CBGB have emerged online. The image will later be found in our Rupert album along with a picture of the down-to-earth redhead out on the town in Las Vegas with Tom Felton recently. Images were sourced from Tom Felton and RupertGrintPeru and there is also a new article sourced by  CBGBtheMovie. about Rupert and the trio's upcoming projects which can be read here with snippets below:


Grint will star in the title role of "Super Clyde," which follows the adventures of a fast food employee and comic book fan whom the Hollywood Reporter describes as "a well-meaning and sweet yet slightly neurotic guy who never really feels like he fits in" (hey, it's Ron Weasley, after all). After Clyde receives a $100,000-a-month inheritance, he reinvents himself as a superhero whose secret power is all that cash, which he vows to use only for good and to award the good-hearted.

As we certainly don't need any more superhero movies or television shows, "Super Clyde" sounds like at least a clever variation on the genre, a sort of a kinder, gentler "Kick-Ass" mixed with Robin Hood-ish good intentions. Grint is, of course, perfect for this role -- one can easily imagine him working the grill, trying to conjure some cover story about his heroic nocturnal charity work to tell his manager.


Rupert Grint will rock out as Rocket From the Tombs and Dead Boys guitarist Cheetah Chrome in "CBGB," a historical medley on the famed New York City music venue. 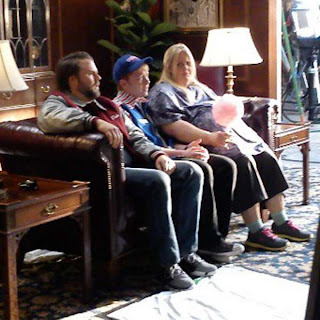 Snitchseeker have also reported that the first images from the set of Super Clyde have emerged online! This is exciting for those of us dying for Rupert's CBS pilot to do well! for more info check out our blog post and for the image of Rupert as a fast food worker just look above!
Posted by Admin, Niamh, Danaholics Anonymous at 7:30 PM