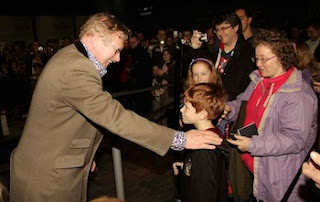 Alan Rickman attended a charity event this past Wednesday, Mugglenet are reporting. He was part of a special phone answering session that raised money for the London based investment firm ICap's charity day. Read more here.


James Phelps and Oliver Phelps tweeted that they also attended this charity day:

"Had a brilliant time at the @ICAPCharityDay today. Some great costumes AND some great amount of money being raised."

In other cast events, Mugglenet attended an exclusive event at the Warner Bros studio tour to launch their lovely Christmas makeover, which was attended my none other than the head of the Weasley household, Mark Williams. The event was especially to mark the millionth visitor to the tour and this family happened to be from Dudley! An image of the above actor is top left and a full report by mget staffers can be read here. The interesting fact i gleaned was that you can now walk across the Hogwarts bridge!
Posted by Admin, Niamh, Danaholics Anonymous at 3:52 PM