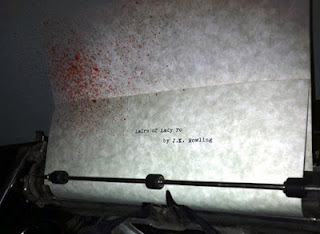 We let you know a while back that JK Rowling's new book was to be released later this year and now it has gotten a name and an image (left) to give us a feel for the, eh, nature of the mysterious title. Mugglenet released the new title which is ;
The Lair's Of Lady Po.
Interesting!!
We will keep you updated as more information emerges...

In other news, Potter went home empty handed last Saturday from the Nickelodeon Kid's Choice Awards. The series was nominated for 4 awards, but received none.
Well at least that day was still a triumph for the film set as the Harry Potter tour opened!
Posted by Admin, Niamh, Danaholics Anonymous at 10:26 PM