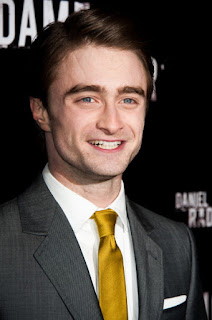 Woman in Black UK linked followers to the special Telegraph supplement that became available over last weekend. It includes a sit-down with author Susan Hill and adapted screenplay write Jane Goldman, a feature on Haunted Houses and most importantly a Dan Radcliffe feature. Check them all out here.

Left, is an image from the Paris Premiere of the film, which was posted by Snitchseeker. The rest can be found here.

Yo can ask Dan a question with Glamour Magazine Uk! Just check out the details here.

Leaky have updated the original 'Dan to introduce a Woman in Black screening in London' story to report that 2 screenings will be introduced by Dan this coming Saturday;

"For fans who missed out on seeing Radcliffe at the film's London premiere last month, this is another great opportunity. Radcliffe and Watkins will be present at the following screenings:

From the press release:

See Daniel Radcliffe in the flesh as he introduces his new film, The Woman in Black, at Vue Westfield, London on Saturday 11th February at 4.30pm. Fans can book tickets and see him introduce the film now at www.myvue.com."

You can book tickets here.

On that Vue Screening, you can win tickets to that screening!!!!
TWEET "the full name of Daniel's character in the film Woman in Black...[WITH] #VueWIB" TO @vuecinemas soon,cause they'll be announcing it tomorrow!

BBC's Film2012 reviewed The Woman in Black yesterday and can be seen here.
Posted by Admin, Niamh, Danaholics Anonymous at 5:13 PM