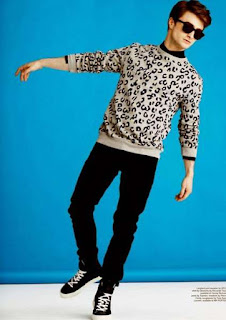 Dan is still busy bee-ing away promoting The Woman in Black (out tomorrow in the UK and Ireland!) and Snitchseeker have picked up on some more magazine and video interviews.
Firstly, we previously posted the Attitude cover (here) but now the leading hp site have a new video from the mag shoot and some images which can ne seen in our Dan album. One of the colourful images is left.

Magical Menagerie also picked up on a new interview, this time for Watch magazine. Some quotes are available below;


“For the first time, I’m feeling nervous about a film coming out,” admits the actor of the supernatural thriller distributed by CBS Films, scheduled to open Feb. 3. “With Potter, you knew it was going to do well. There was a preexisting fan base. But with this, there’s that fear in the back of my mind that no one will really care.”

“I read the script just about two hours after we finished filming the last Potterfilm,” says Radcliffe, “and I thought it was the most compelling story. At the beginning of the film, [Arthur] is a deeply unhappy character in a state of emotional paralysis. But when it really gets going, he’s forced to come out of that and be an active participant in his own life.” It also didn’t hurt that the script scared the daylights out of him. “From the first page when he’s in the house with the woman in black, I was going, ‘Get out! Run! Don’t ever go back!’ ” he says with a laugh.

“I’m very ambitious,” says Radcliffe, who harbors dreams of directing one day. “In the back of my mind, there are always voices telling me what I have to achieve. That drives me on, along with other people thinking that I won’t be able to achieve those things.” He lets loose a hearty laugh. “I find other people’s doubts incredibly motivational.”

More from Dan can be read here.

The Attitude video from Snitchseeker can be viewed below;


SS also got this video of Dan being interviewed on The Talk;


Finally, Woman In Black UK posted a link to a video if Dan talking to ITV about wanting to "traumatise as many people as" he can. Check it out here.
Posted by Admin, Niamh, Danaholics Anonymous at 4:26 PM