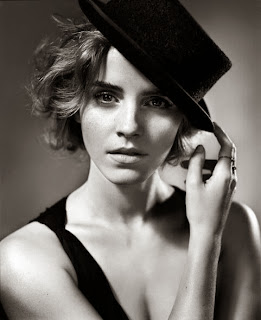 Some outtakes from Emma's photoshoot for GQ earlier this year have emerged. Emma did a photoshoot as Woman of the Year and one of these outtakes is left, which the the rest are in the gallery.

In other Emma news she is set to star in another film by Perks of Being a Wallflower writer and director Stephen Chbosky. The film entitled While We're Young, is "based on the novel by Adena Halpern novel 29, will be written for the big screen by Michael H. Weber and Scott Neustadter."

Snitchseeker are assuming Emma will play lead character Ellie at 29 which is summarised as follows:

Ellie Jerome is a young-at-heart seventy-five-year-old who feels she has more in common with her twenty-nine-year-old granddaughter, Lucy, than her fifty-five-year-old daughter, Barbara. Ellie’s done everything she can to stay young, and the last thing she wants is to celebrate another birthday. So when she finds herself confronted with a cake full of candles, Ellie wishes more than anything that she could be twenty-nine again, just for one day. But who expects a wish like that to come true?

We will post more of this as it emerges.
Posted by Admin, Niamh, Danaholics Anonymous at 5:08 PM