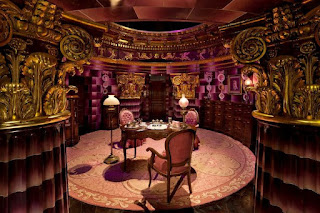 I have just broken my Lenten fast to get this photo, left. WB Studio's Facebook has posted a brand new photo of the studio tour suggesting on their wall that they would post some more, getting us all excited for the March 31st opening. Thanks to HarryPottersPage for the tip.

Which gets me thinking about the red carpet event we were informed of a few days ago. Matthew Lewis is set to film Wasteland up until the 31st March, probably ruling out his participation. Who else might go? Rupert? Rowling? Daniel Radcliffe is set to be filming Kill Your Darlings in New York, most probably ruling him out too. Emma's plans are up in the air atm, but who knows maybe she'll make an appearance? And what about crew? Will Oscar nominated Stuart Craig turn up? David Heyman is a shoe-in as he always turns out for these events and is basically the head of all things Potter!
We will continue to speculate as cast and crew's plans become more clear.
Send us your thoughts! Here and on Twitter!
Posted by Admin, Niamh, Danaholics Anonymous at 9:58 PM