SAY GOODBYE TO DAN ON HOW TO SUCCEED,RICKMAN IS SEXIEST,RUPERT AND OLIVER P SUPRISE SCHOOL KIDS 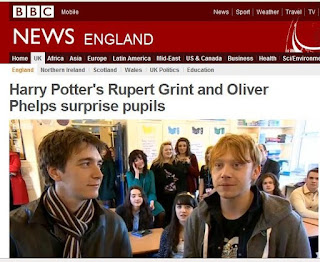 How to Succeed are putting together a goodbye video for Dan Radcliffe and his H2S costar John Larquette as they are both finishing up in January (*sigh*), and are asking fans to submit a 30 second video through youtube.We kind of want to do one here...even though we never said HELLO to him on Broadway being Weasley poor...

On other H2S stuff, Dan needs your vote for Broadway Star of the YEAR! You can do so here.

In other Broadway news, Alan Rickman has been voted sexiest man on Broadway. CHECK. IT.OUT.

Finally, Rupert partook of an exclusive competition where one school could receive a visit from the wonderful redhead, ask loads of questions and win dvds. That school was Bishop Walsh and rupertgrint.net have been reporting all day on the story and retweeting students' reactions. They have now posted a video of Rupert who was joined by fellow Weasley,but not redhead, Oliver Phelps...thats George,just so you know! GO HERE picture of this article is one posted by the twitter of the school.
The leading uk Rupert site posted a link to a short clip from Bbc, which can be viewed here. Our article picture is one i took from the bbc video. RUPERT GRINT.NET just posted a full report here.
Posted by Admin, Niamh, Danaholics Anonymous at 11:47 PM