SEAN BIGERSTAFF has been pretty quiet since his stint in Chamber of Secrets (he played Oliver Wood and should have been all over Prisoner of Azkaban and feature in Deathly Hallows Part 2), but now Magical Menagerie are reporting he is to be seen appearing in the video, The Wicker Man: You're Bard. The video comes from his new production at His Majesty’s Theatre, Aberdeen starting February 21st of an adaption of the Wicker Man called An Appointment with the Wicker Man.Check the video out below;

WOMANNBLACK let us know early this morning that you can vote for Dan as BEST DRESSED 2012 with GQ Magazine. If you wish to do so head here. they also posted this link to GetGlue where you can unlock stickers when you check in!
Matthew Lewis was also up for Hottest Guy of 2011 according to MatthewLewis.Com and got 2nd place and MLC also reported that he is up for Hottest Budding Hearttrobs, so go vote here. Matthew is also Tressugar's sexiest Potter star! 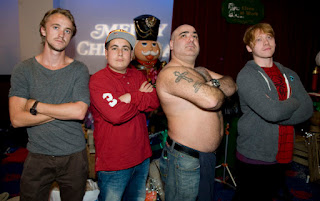 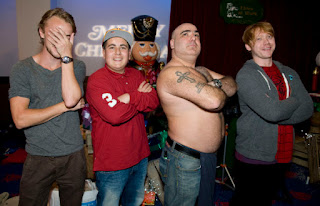 Mugglenet are reporting on Mythgard Institute's schedules Potter class in Spring 2012. More info here. They also had info no Quidditch at the Olympics in the past week which can be seen here.

TOM FELTON posted these nice random pictures that he suggested were good and bad for a Christmas card that he might send out. he remarked that Rupert was better in the second one!

Rupert Grint US retweeted this awesome tweet this week;