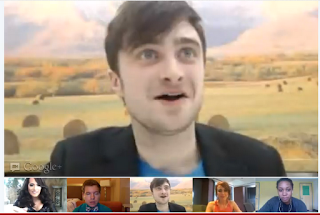 Daniel carried out his support for the Trevor Project by taking part in a rather long live chat for the charity.
It can now be viewed below:

DR.CO.UK are reporting that Daniel is rumoured (The Wrap) to be starring as a Hunchback in an upcoming adaption of Mary Shelley's Frankenstein.


The “Harry Potter” star is interested in playing the lead role of Hunchback in Paul McGuigan’s revisionist take on the classic tale, a person familiar with the project told TheWrap.
Based on a script by Max Landis (“Chronicle”), this adaptation of Mary Shelley's novel of the same name, puts a sci-fi take on this classic story about a creature produced through a scientific experiment.
Hunchback is described as pathologically dirty and dressed in old clowns clothing.