VIDEO: Behind the Scenes on Cripple of Inishmaan, NEW interview with Daniel Radcliffe

Just under two weeks to go! So excited!
In the run up to the opening night of The Cripple of Inishmaan, Daniel Radcliffe has posted a new video blog to his google+ talking about rehearsals etc. This can be viewed below:


In other promo of the play, Daniel spoke to The Telegraph recently about the play as well as many other topics including, of course, Potter, The F Word and Kill Your Darlings. Below are a few snippits whereas the entire article can be read here. 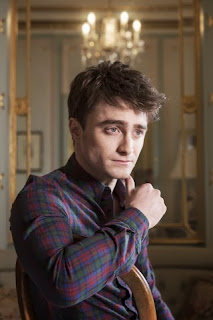 [Radcliffe] has arrived at rehearsals not only with all the lines learnt, but physically and vocally ready for the part. He has a personal trainer to ensure that his body can take the stress of Cripple Billy’s shufflings and contortions. He has consulted a voice coach with cerebral palsy to see to it that he can bring that to the role, too. And though he boasts Irish ancestry of a sort – his father, who effectively became his manager when the Potter series began filming, hails from Belfast – he has studiously immersed himself in recordings of the Aran islanders.


“The most wonderful thing I hear is people coming up and saying 'Thank you for my childhood’, which still blows my mind but is very sweet. When people say 'What’s it like to be associated with such a big franchise?’ I say 'It’s very easy when your franchise is something that is so loved.’”

“It was such a fantastic opportunity, some people can’t believe it could be entirely a good thing. When there were no problems during the series and none of [the young stars] got screwed up, the focus shifted to coming out of it – 'Well, that’s when it’s going to fall apart.’ But for me in my experience of it – I can say the same for Emma [Watson] and Rupert [Grint] – we have just gone off and we’ve been doing OK. We’re going to be written about in connection with Harry Potter forever. That’s fine. In terms of whether it has affected our ability to get other jobs, so far, touch wood, no, I’m relieved to say.

There was also a lovely photoshoot with the article,pictures from which can be seen above and in our Dan album.
Source: Snitchseeker

i love daniel radcliffe keep updaing of his films you know horns,F word and kill your darlings are going to show on Toronto International Film Festival

Hello there! Yeah, we posted on this a bit ago - http://danaholicsanonymous.blogspot.ie/2013/08/toronto-fest-tom-feltonalan-rickman-and.html
and we earlier posted that the 3 films were at it as the news emerged. :D