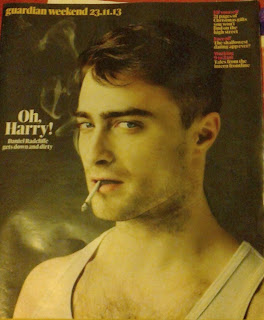 A few days ago we reported that Daniel Radcliffe was to appear in The Guardian's Saturday magazine Weekend. We now have the cover image (left) and some quotes for you with more images and possibly scans to follow.

In the article Dan spoke on many things, but here are a few tidbits that were new to me:

When one audience member at a screening asked why he took weird parts, he held up what many of us already know: it's not an attempt to take people away from Harry, rather his interest in the parts "originallity":

"I can't put it down to anything more than that I've got weird taste...I pick films based on scripts and directors and parts. I think I've got good taste, but it's slightly left of centre. I'm not interested in making movies I've seen before...That's all it's governed by; there's no master plan to distance myself from Potter with every role".

He feels no hatred of his association, nor interviewers questions about it, only appreciation for where it has got him:

"I know Potter is going to be with me for the rest of my life, so to try to set a goal where nobody talks about that anymore is stupid. It would be like...Paul McCartney might have gone on to do a lot of other things, but people are always going to want to talk about the Beatles...You have to embrace the...opportunity it has given you to forge a career for yourself".

Dan puts his negative feelings about early performances to bed:
It wasn't growing up in public that he found so difficult as learning how to act in public..."My acting lessons are there for all to see. That's essentially what the films are, [Rupert, Emma and I] learning how to act...My tendency is to underplay stuff and sometimes I look at the films and I know I thought I was being subtle at the time, but actually I'm just doing bugger all. You can't dwell on the things you're not happy with, thought; you've got to move forward and get better".

He also talks about his 12 year old advanced hair leg:
"In the second film, there was a shot where I had to hitch up my trouser legs up to show I'm not wearing socks, and at 12 my legs are were way too hairy, and they say 'Nobody's going to believe any 12-year-old would have that much hair', so they had to shave two inches up from my ankle".

Another, less amusing story he tells from the past is, when in one of his "posh" schools:
"a teacher at Sussex House...that proudly cites him as a star allumnus, telling him he was stupid when he was eight years old, and how devestating he found that".
Posted by Admin, Niamh, Danaholics Anonymous at 9:14 PM