SDCC Victor Frankenstein: What we know so far, Rear of the Year Acceptance Speech

I'm a bit dissapointed that there is still no Victor Frankenstein trailer (leaked or otherwise) from last weekend's San Diego Comic-Con. But we gained quite a lot of insight from both the panel with Dan Radcliffe and internet blogging on the trailer.
Check out the panel below where Dan and James McAvoy bromance it up (some of the banter not suitable for younger viewers) and talk about how this film re-installs the name Frankenstein to the scientist (YES, my pet hate is when people call the monster Frankenstein) and explain how Igor, whom Victor sees almost as an intellectual equal, both aids and holds Victor back from his ego and insanity. With thanks to the YouTube channel Flicks and the City: 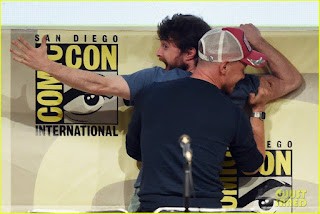 If you want a blow by blow of the trailer and extended clip shown at the con before we get that delicious video, check out some bits of the Shock Til You Drop post about it below. Please note this is spoilerific and I haven't even read most of what i'm copying and pasting! They seem to confirm the dark aspect Dan says in the panel they were looking for, though i also expect some dark humour if Dan had anything to do with it!

"Most of the trailer goes about introducing McCoy’s title character and his obsession with experiments.  Victor tells Igor that they’ll be part of a scientific enterprise that will change the world. “We will create life out of death,” he tells him and then we immediately get the first “It’s alive!” of the trailer as his experiment works. “You realize how significant this is?” Igor asks enthusiastically. “Oh I have an inkling,” Frankenstein responds.

Frankenstein is confronted by Deputy Inspector Turpin (Andrew Scott from Sherlock) about “missing body parts” and he’s questioned by a woman (possibly Jessica Findlay’s Lorelei?) asking whether he’s afraid to challenge the natural order, as she mispronounces his name and he corrects her. (A little Young Frankenstein joke).
While Igor admires Frankenstein, it certainly seems like he’s beginning to question his scientist friend’s motives and sanity as they get deeper into the experiments. The title cards say “The Legend is Reborn,” before we see lots of quick shots of various creatures chasing after them, as well as the famous monster that grabs its creator.

Afterwards, they showed the first full clip from the film, which involves Victor showing his fellow scientists his latest experiment to bring the dead back to life. It opens with Victor and Igor walking down the halls of the university where he calls out to everyone that they’re doing a presentation “in Hall H” (was that inadvertent or did they know while shooting they’d show this scene at Comic-Con?).
“Since the beginning of modern medicine there has been an assumption regarding the state of mortality,” is how the presentation starts, and he orders his assistant Igor over to the electrical switch. Victor gets a devoted “Yes, master” in response. “I give to you life by my own creation,” as he pulls a sheet off something that’s lying on the table, which turns out to be a small half-sized body of some kind.  He explains that he had built this “homunculus” out of various body parts and he calls for those in attendance to come closer to see what he’s doing. “Now by the miracle of electricity, I give you in 3.. 2…1…” and he zaps the body with an electrical charge causing flies that were resting inside of the bodyto fly out as the others start backing away from the stench. Meanwhile, there’s a snarky blonde guy nearby (Finnegan played by Freddie Fox), who clearly isn’t a fan of Frankenstein. He applauds the failure and makes snide comments. “This is an exquisite show of depraved lunacy,” he chides.

Victor orders Igor to increase the charge and he shocks it again, but nothing happens.  He then calls for a full charge and zaps it again and nothing happens. Then, the eye opens and Victor proclaims “You see? It’s alive.” An arm juts out from the body sending Victor flying to the other side of the room as the creature gets up. It seems to be a cross between a decomposed dog with a monkey’s head that starts screeching and runs out the door and down the stairs. Victor follows him, and ends up in a dark laboratory. He looks up, and sees the creature on a shelf above him as it dives off and the clip ends.  "

The most interesting interview I unearthed while scouring the internet is from E!, where they bring up his recent award for Rear of the Year.
Moviefone have the clip here.

I'll be uploading more interview clips soon and you can view some interesting pictures of Dan from the Con on our Facebook.
Follow the official Frankenstein Twitter here. More on the film at ComingSoon.net.
Posted by Admin, Niamh, Danaholics Anonymous at 10:57 AM