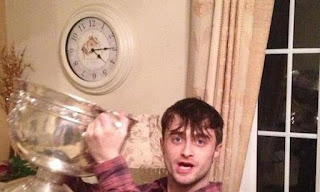 At first I was excited to see pictures online(left) of Daniel Radcliffe enjoying himself among the All-Ireland minor champions Dublin team last Monday night. I jokingly thought would loved to have been there to take advantage, but soon changed my tune so to speak. As my boyfriend quipped "oh yeah, a guy in my course's brother was one of the lads...he said Radcliffe was langered" I became concerned due to the fact that Dan has been off the drink for awhile now (langered means riddikulusly drunk) since his bout of alcoholism.


"The actor was in Dublin - where he is filming The F Word - when he happened to bump into Dublin's minor Gaelic Football team, who were celebrating winning the their first All Ireland title since 1984, on Sunday and joined them for a house party where he stayed until the early hours."

Reports also say Dan was to be found, wandering alone down Grafton Street in the early hours. I always thought that he had a 'minder' of sorts when he was out and about due to his high profile. Yes, Ireland isn't quite as known for bat-crazy fangirls, but this was a little odd. 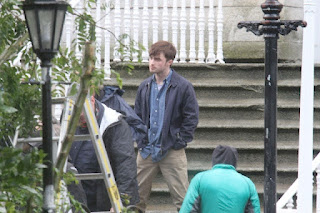 Yet filming for the F Word  went off last week without a hitch, so my concerns were lessened slightly. The rom-com  was the reason Dan was in Dublin. I am a bit disappointed there was so little news on filming locations. I heard rumours of Temple Bar as some of the film is apparently set there, but the only pictures I saw were of Georgian housing which is all over Dublin. Also these images are of Friday's shoot, ie the last day of filming.

On the bright side, this might encourage an Irish premiere due to the support of the Irish film board?? We can only hope.
The F Word has now finished filming and Dan will be back across the Atlantic to film Horns.
Source: Entertainment.ie

In other F Word news, he has been talking to many entertainment channels regarding the film, including MTV, ET Canada and Access Hollywood.
The MTV interview with Josh Horowitz is quite extensive, but can only be viewed by people in the US here.
Below are some quotes for us unfortunates;
On Horns-"There's nothing really, I think, that can be so exciting to an actor as an original idea,".
"All the characters have an emotional journey on that. That's why it's such a good script," Daniel Radcliffe says of his upcoming film "Kill Your Darlings.".
"It's something that appears on IMDb and I get asked about it," Daniel Radcliffe says, clearing up rumors of voicing the title character in "Pinocchio." He said that he was not attached but is flattered to be connected, even in rumour.
UPDATE:
View below:

Access Hollywood and ET Canada conducted shorter interviews from the Canada F Word set. The former seems to have been removed, but you can view the ET Canada clip here.
Source: Danradcliffe.com

Outside of the US/Canada you can view the video below:

He also spoke about The Young Doctors Notebook at the press screening of the Sky Arts show.
Hollywood reporter covered the event:


"I watch mostly comedy," Radcliffe said Saturday night after the screening at London's SoHo Hotel. "I definitely wanted to do something that's funny. But episodes three and four also get really dark and sad."

He also said he has been a fan of Russian author Bulgakov for years. "I am sort of an obsessive Bulgakov fan," he said, sharing that he first read the author's The Master and Margarita, which he called "the most exciting work of imagination" he had ever read. "When I first met with Jon, I was nearly too enthusiastic."