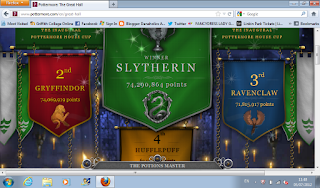 Slytherin won the house cup last week, meaning that Chamber of Secrets would be revealed to them before anybody else. The wait time for everyone else was revealed to be 24 hours, with the new chapters opening to the Slytherin house today. This means that new information concerning the Malfoys (fitting for the winners,really) will be revealed to us all tomorrow!
Mugglenet revealed that the new chapters were to open today to Slytherin's and they also revealed that these new chapters revealed details of the Malfoys' history as a family.
Stay tuned to our twitter for details of when it will be open to the rest of is if you're not in Slytherin.
If you are already in, ENJOY!

UPDATE:
Pottermore are currently working on the sounds for Chapter 16 and have said that they will open chapters 5-11 shortly after the opening (tooday and tomorrow) of the first 4 chapters.
Posted by Admin, Niamh, Danaholics Anonymous at 6:59 PM