Rupert In Savannah and Ready of CBGB,Matt Lewis In 'Filth' Video,David Bradley for Doctor Who 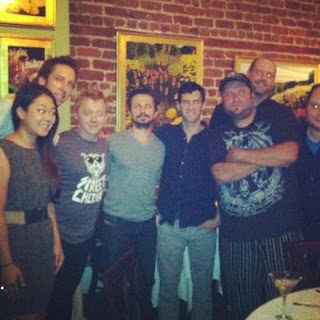 According to many fan reports, Rupert Grint has landed in Savannah this past Friday to begin his role as Cheetah Chrome in CBGB. Some images of him with fans can be seen here and here.RupertGrintUS and RupertGrint.Net have been reporting on the update and have commented on his new hairdo for the role. RG.US have posted some nice "tidbits" from the set here. Top left is an image of Rupert, co-star Justin Bartha and some other people at a Savannah restaurant.Apparently he drops his pants in one scene!Rockin' out,man. A slideshow is available here. Snitchseeker also received word from his reps that he will only be filming for a week:

Got word from Rupert Grint's reps that he's only filming @CBGBtheMovie this week as Cheetah Chrome in Savannah & is done at the end of week.

You can submit a question for Rupert to Rupert Grint. Net,who will be interviewing Rupert from the set tomorrow,by tweeting them @rupertgrintnet with the hastag #RupertCBGB. In other interviews, Sugarscape got a hilarious one with the redhead,which can be read here.Another article can be read here.

In other cast news, Matthew Lewis' turn in a music video from the band A Band of Buriers has been released online. Snitchseeker have posted the video and it can now be viewed below;

A new Wasteland article can be read here

Finally,Mugglenet have revealed that David Bradley, AKA Argus Filch is to appear in Doctor Who, a British person's honor, but is also to receive an honorary degree no less!

The veteran actor David Bradley - who portrayed Argus Filch in the Harry Potter film series - is set to receive an honorary degree this Summer from Warwick University. The graduation ceremonies will take place throughout the week of July 16th.

The actor will appear in the second episode of the new series of Doctor Who, which begins August 25th. He is to portray Solomon, but as Doctor Who is always very hush hush, there are no more details! Tune in to BBC ONE at the beginning of Hogwarts term,September 1st to find out!
Posted by Admin, Niamh, Danaholics Anonymous at 7:27 PM