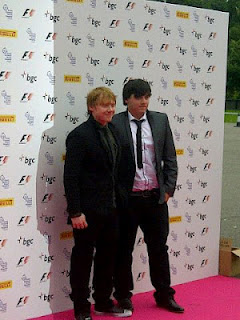 In the wake of rumours surrounding Rupert's part of CBGB starting tomorrow, he is attending the "annual F1 party" tonight according to @MediaEyeTweets, and @PopPrince reported moments ago that he has arrived at the Silverstone party for Great Ormond Street Hospital, an image of which is left.
A new Q&A with the redhead will appear in the 20th Anniversary Edition of Blag magazine:

This volume (Vol. 3 Nø 3) has Tom Hardy and Noomi Rapace on the front cover, but more importantly it will include a brand new Q&A with Rupert in which he even mentions the Birthday Project we did called “Blag Around the World”.

You can order a copy here, but as RG.US broke this news, I am sure they will have scans as soon as it hits shelves. 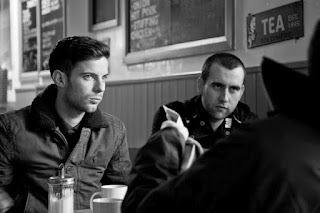 In other news, a new image from the set of Matthew Lewis' upcoming release Wasteland has been released by the official facebook of the film, and can now be seen right.
Posted by Admin, Niamh, Danaholics Anonymous at 8:46 PM