A Peek into How the 'Wonderbook' Will Interact With Pottermore,Japanese EBOOKS soon Available, Video Look at Detailed Map-Wizards Collection 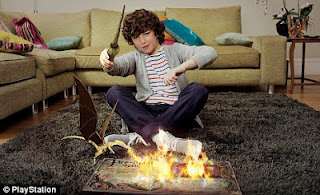 The creators of the so-called Wonderbook, an interactive experience of Potter spells within a book, have been speaking about how it will interact with Pottermore:

How much of an influence and input has JK had on the Book of Spells is it a license deal or is she there all the time?
She is very much hands on, not only did she come up with the Book of spells but she has written the story, the spells and conundrums but also her and her team have been very hands on with looking at what we have done and signing off on everything. Looking at the characters and locations and making sure they are authentic enough.

The entire interview can be read here.
Source: Snitchseeker.

In other Potter merchandise, a video detailing the fabulous Hogwarts map included in the Ultimate Wizards Collection of 30 dvds, has appeared online and can now be seen below as posted by snitchseeker.


Finally, Pottermore have announced that they will soon be releasing the Japanese versions of the Potter books in eBook form!The date has not being released, but it is said to be later this summer! Keep you posted!
Remember:The house cup is announced tomorrow along with further details in Chamber of Secrets! We will ReTweet Pottermore just as soon as they post news tomorrow and will make a post here tomorrow evening!
Posted by Admin, Niamh, Danaholics Anonymous at 8:31 PM