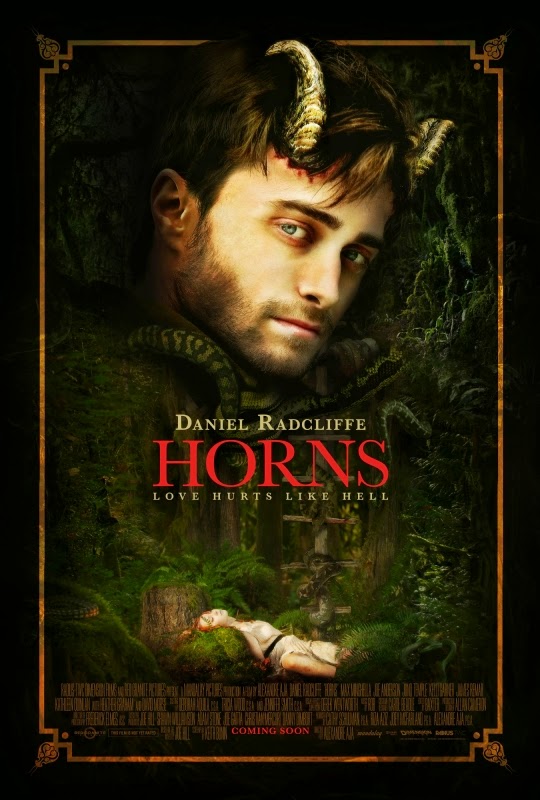 Dan Radcliffe has been a busy man, finishing Cripple of Inishmaan this past Sunday, flying into Toronto for the What If Premiere Monday and he has been in San Diego since yesterday for Comic-Con to promote upcoming Horns which has got two trailers and a release date of Halloween this year. In that time, we have had some new images from both What If and Horns (these will be added to our galleries here and here along with some much needed WI promo and Cripple of Inishmaan pic (here) updates, one of the Horns poster a la Empire is left).
Below you will find some recent videos, both promotional stuff and recent interviews we have come across, ENJOY!


Remmber US Fans can win a signed WhatIf Poster by becoming a film Ambassador and promoting it through their Facebook, Twitter and Tumbler. Sign up here.

Even prior to the below con, Horns writer Joe Hill has been singing Dan's praises on Twitter:


Just saw the clips we'll be showing of HORNS at SDCC. All goosebumpy. As an actor, Daniel Radcliffe can do anything & make it look easy.
— Joe Hill (@joe_hill) July 21, 2014


In trailers, the first teaser was released prior to San Diego:


And another, currently for US viewers only, was released at the con and posted by MTV here.


Interviews and San Diego:
There is a sound clip from Dan's first radio interview in San Diego at the link below.
Daniel Radcliffe in San Diego | DanRadcliffe.com

The full Horns conference is below:


Daniel appeared on The Food Network's In the Kitchen show recently and some of this can be viewed below:

Dan was caught cosplaying as Spiderman, so if you got snapped with a 5 foot 5 Spidey chances are you got a selfie with Dan himself!

Happy 25th Daniel:
How long have you been on this planet, That's beautiful, gee, a quarter of a century....
Dan celebrated his birthday somewhere in transit but the lovely comic-con goers of Hall H for his panel sang him a lovely happy birthday, over 7,000 people they say.  Even nicer, Buzzfeed compiled a lovely 25 times the internet fell in love with Daniel Radcliffe. Frankly, for me its more like a million because i've fallen in and out over the years.... Check the article out here.
This was our own message in our usual completely inappropriate manner,lol:


Welcome to the 25 club, hope youre having a great day in Toronto or wherever your crazy workaholic butt is... http://t.co/7Yiquvz5xE
— DanaholicsAnonymous (@DanaholicsAnony) July 22, 2014