Daniel Radcliffe; What If Poster, Stills, Appears On VH1 Talks Skinnydipping, Trailer for South Bank Show, Donate to Trevor and Get Special Extras 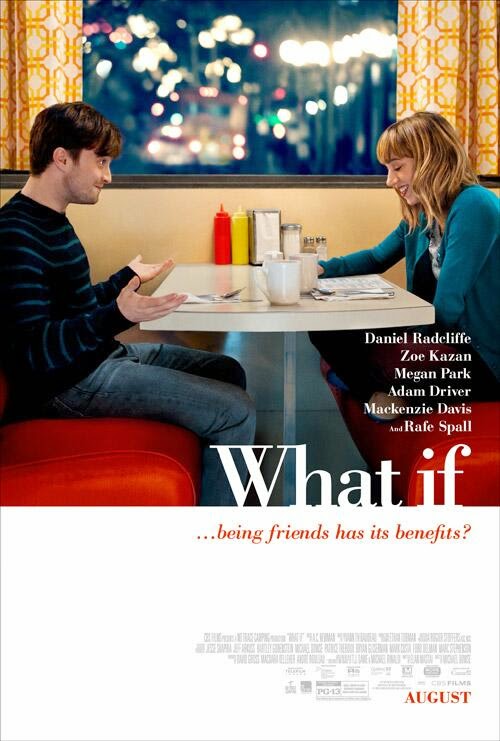 The Official What If twitter posted the first poster for the film a few days ago aswell as some promos. Check out the poster left and the promos in our F Word gallery. You can follow the twitter here.

In related news, Dan has been attached to yet another project (will that boy ever take a holiday, lol) called You Shall Know Our Velocity. The film, which is an indie adaptation of the below plot, will begin filming next Spring should Dan confirm.

Sollett directing from Wells Tower’s adaptation about two mismatched friends — Radcliffe’s bookish and awkward Will and the self-proclaimed ladies’ man Hand, who set out on a two-week trip around the world and a $32,000 insurance payoff from their friend’s fatal car accident with the goal of giving away the windfall to those in need.

Did anybody else just get Homer Simpson's song about 'stealing a car for Moe, insurance fraud today' stuck in their head?

In other news, Dan attended the Drama League Awards recently and some photos are in our Broadway Inishmaan gallery. Sadly Dan did not win :(.

In other Inishmaan news, people who purchase tickets for certain performances of the show can both donate their money to the Trevor Project, a truly worthy cause, and attend a post-show event! Details below:

(1/2) #InishmaanBway will donate a portion of 7/15 ticket sales to @TrevorProject, which Daniel Radcliffe supports! http://t.co/49GzouYr6M
— Cripple of Inishmaan (@InishmaanBway) May 14, 2014


Finally, as we reported previously, Dan is to feature in a upcoming South Bank Show episode. The trailer for the series has been released and a shaky version is below: