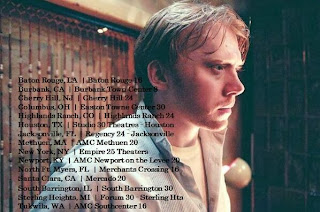 Today Charlie Countryman starring Rupert Grint comes out in cinemas in the U.S. and as we previously mentioned it will also be available on some On Demand services. Check out or previous post here for more info.
If you'd rather pre-order the DVD or BluRay today, you can do so in the U.S. here. No word as yet on UK or other places pre-order.

In other news, Rupert's co-stars Ben Winshaw and Brendan Coyle have been speaking to the Evening Standard about Rupert.


Grint was “amazing”, [ Ben Whishaw] said. “He’s incredibly quiet but he’s got great confidence and is very grounded.” Co-star Brendan Coyle, whose Downton Abbey wife Joanne Froggatt was in the audience, said of Grint: “I’ve seen a lot of debuts but none as accomplished as that.” But the whole company was “quite extraordinary”, he added.

Rupert also spoke to BBC and that interview can be read here.