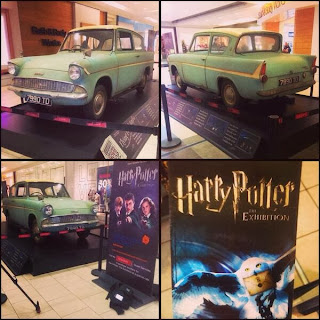 In Harry Potter news, Harry Potter the Exhibition is readying to open in Edmonton, Canada and has set up
one of the props from the exhibition (to open later this month) in one of the town's shopping malls. Check it out left.

In other exhibition news, the event will hit Europe this coming summer, with it's first stop to be in Sweden.
The tour was originally meant to conclude after Canada after being on the road for five years around the US and landing in Tokyo this year. The exhibition will set up in  Norrköping, Sweden, at Nya Parken sometime in May of next year.

There is no word yet on whether any more European dates will be added. Tickets for Sweden will be available for purchase here from next Thursday, 21st November.

In other Potter fan events, the first video look at the Japan theme park has emerged. Two trailers (in japanese) can be viewed below, and Snitchseeker provided a translation of what is said in the trailers, which will be directly between the videos.

It's a theme park. To the Japanese public, this Harry Potter theme park will open next year at Universal Studios Japan. You will be able to experience the unbelievable scale, unbelievable surprises...THAT world will come alive. All of the excitement will be here soon. The Wizarding World of Harry Potter. Let's leave the real world.

It's a theme park. To the Japanese public, this Harry Potter theme park will open next year at Universal Studios Japan. You will be able to experience all the sights, sweets, drinks, mysterious things as if the world of Harry Potter were to come to life right in front of your eyes. THAT world will come alive. The Wizarding World of Harry Potter. Let's leave the real world.

Finally, in further news for Japanese Potter fans, the website Pottermore will now be available in Japanese.
Visit the site here.