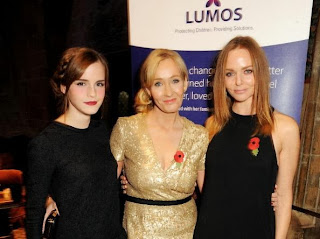 A fundraising event for J.K. Rowling's children's foundation Lumos was held yesterday in the Warner Bros studio Tour in Watford London. In attendance alongside Emma Watson and designer Stella McCartney (left) were other Potter cast including Evanna Lynch, Alan Rickman and Warwick Davis. Producer on Potter and the future Fantastic Beasts film, David Heyman, was also in attendance. Images can be seen in our gallery.

In other Lumos promotion, Jo also spoke to Harpers Bazaar and others. She spoke of the work of the charity so far:

Since setting up the charity eight years ago to help change the lives of so many children living unnecessarily in appalling institutions across the world, Lumos has already helped governments to take nearly 12,000 children out of these institutions.

We have prevented the deaths of more than 400 extremely vulnerable children with disabilities, who were not receiving the care they needed in institutions.

We have helped the EU change its rules on how it uses money to reform health, education and social services - and we are just beginning.

When chosen as Harpers Bazaar's  Woman of the year, she also listed "Malala Yousafzai" as her personal inspirational woman of the year. The full Harper's Bazaar text can be read here. 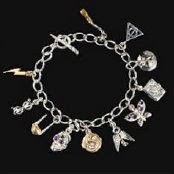 Also in honor of the charity, she has donated a special charm bracelet (right) for auction at Sotheby's,34–35 New Bond Street, London W1, on December 10th:

On the day that the seventh Harry Potter book was to be released, my editor, Emma, and the head of Bloomsbury children’s books, Sarah, met me in London and gave me a small package to open. Inside was what would become (aside from my wedding ring) my most treasured piece of jewellery: a bracelet covered in gold and silver charms from the books. There was a tiny Golden Snitch, a silver Ford Anglia, a Pensieve and a stag Patronus. There was even a Philosopher’s Stone in the form of an uncut garnet.