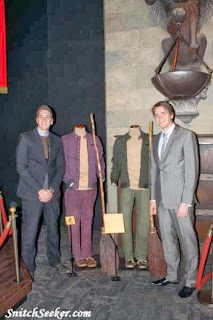 We've been mentioning now and again that Harry Potter the Exhibition was moving to it's latest location, Edmonton, Canada, last week. James and Oliver Phelps opened the exhibition at the TELUS World of Science building in the city last Friday and a picture of the pair at the exhibition, which includes props and costumes from the movie including a working sorting hat, is left courtesy of Snitchseeker who have a report on the event if you click on the word 'Snitchseeker' above.
The exhibition will stay put in Canada until March 9th next year.

In other Potter news, the Potter series has been voted BEST YOUNG ADULT NOVEL. The poll was taken by Entertainment Weekly readers. It beat out amazing competition such as Harper Lee's To Kill a Mockingbird and the recent hit The Fault in Our Stars by John Green. And Green proved to be a worthy runner up:

His own final vote “obviously” went to Harry Potter. His explanation: “HP is the most important story for a generation of readers and is one of the central reasons that my career even exists, so it’s a bit silly even to be in the ring with it here at the end.”

Finally, in the true early Christmas spirit, Warner Bros has posted a holiday gift guide, which of course includes lots of Potter merchandise, including some additions such as the USPS Stamp Collection and Black Milk Leggins. The collection can be viewed here.
Posted by Admin, Niamh, Danaholics Anonymous at 12:05 AM