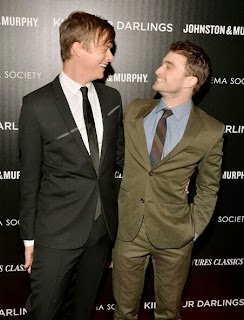 The stars of Kill Your Darlings Daniel Radcliffe and Dane Dehaan are to launch a special art exhibition inspired by the film and you can get involved! Are you artistic? Do you live in the UK? Then this could be for you:

The Works are launching a Cut Up art exhibition and they want your submissions.
Submissions should be made using the cut up technique i.e. taking scissors to an original text then rearranging the fragments to create a new one. This snappy creative mode is inspired by a double whammy of Williams (Faulkner and Burroughs) and has been used by the likes of David Bowie, Kurt Cobain and Thom Yorke. In the spirit of 'killing your darlings' your cut up creations can be inspired by whatever your own creative obsessions are: design, fashion, illustration, photography, art, literature, music.

Submissions are to be uploaded to the official Facebook by November the 17th and you can find out more in the video below:


If you're living in the U.S.A, find out when Kill Your Darlings is playing in your city here.


In other Dan news, a new interview Daniel did for the upcoming second season of A Young Doctor's Notebook has been released by Sky Arts.
The interview can be seen below:

There was a new clip, but this has been taken down from Sky.
Posted by Admin, Niamh, Danaholics Anonymous at 7:07 PM