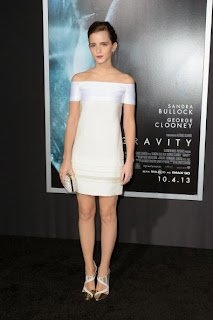 In other Emma news, she attended former Potter director Alfonso Cuaron's latest film premiere, for the film Gravity. Also in Potter alumni, former producer David Heyman was also in attendance, who just announced he is to oversee production on the highly anticipated Fantastic Beast and Where to Find Them movie.
A picture of Emma is left and if you live in the UK, you can win a chance to see Gravity for free here.

While we're on Alfonso Cuaron, here's an interesting few words he had about Daniel Radcliffe:

My next interview after this is with Daniel Radcliffe, so it's like a "Prisoner of Azkaban" reunion for me.
Alfonso Cuaron: Here in New York?

And include the word "b----rd"?
Cuaron: Say, "to the amazing b----rd" [laughs] ... I am so full of admiration on how he's handling his career. I'm so filled with admiration for him. He's so smart and has amazing taste.

hey nice post meh, I love your style of blogging here. this post reminded me of an equally interesting post that I read some time ago on Daniel Uyi's blog: Achieve Your Goals Successfully .
keep up the good work friend. I will be back to read more of your posts.