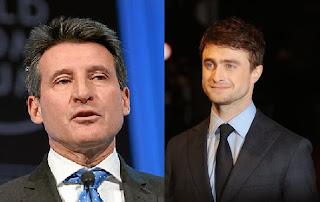 It has just been announced that Daniel Radcliffe is to star in a biopic of British Olympian/Politicial Sebastian Coe. The film entitled Gold (I've had that song by Spandau Ballet stuck in my head since yesterday) will begin filming in April and "will focus on the rivalry between Coe and follow runner Steve Ovett during the 1980 Moscow summer games". This synopsis reminds me of the recent film Rush and I think Dan will have to get in major shape to pull it off, but he will.


In other Dan news, he recently sat down with Teen Vogue where he was asked to compare life on a Potter set and his indie films:

There a lot fewer people on set with indies. But films are always chaos. Everyone assumes because Potter had time and money, it was really efficient. Not the case at all. The more time and money you have, the more you will probably waste. Time and money give you the luxury of not having to make a decision right away. With smaller films, the decisions have to get made. They have no money and time so you actually end up with great momentum on set and you film really quickly.

He also gave advice to young people looking to achieve their dream:

It all depends on what your definition of success is, because the only one that matters is the one you set yourself. People can say I’m successful—I’ve had a very charmed life and I’ve been very lucky to have done the things that I’ve done—but at the same time, I was never 100% happy with the work I did during Potter. My definition of success is about making a transition out of Potter and forging a long-term career for myself with longevity. Define success on your own terms and don’t give up until you get there.

The full interview can be read here.


Finally, some new short reviews of Kill Your Darlings are below as well as some questions and answers from the London Film Festival Q&A.

"@danedehaan continues his own career trajectory with this sensuous, lizard-like performance; hypnotising those around him" - @EpochTimes

Q- What was it like to have to have to portray a real person rather than a fictional character?

A - "we didn't have match up to an iconic image, we had to make an honest character as they were at the time" Dan Radcliffe.

Q- Did you have a fixed perception of how you wanted this film to be?
A- "I wanted it to be shown from an 18/19yo perspective. Falling in love & having your heart broken for the 1st time" @krokasaurusrex