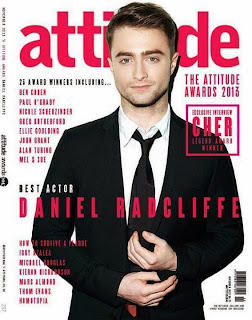 As we previously reported, Daniel Radcliffe won at the Attitude Awards and graced their cover. The interview scans or text are as yet unreleased but a few snippits were released on RTE Ten. In the interview, Dan was asked how he felt about sex scenes and nudity, in particular the gay sex scene in Kill Your Darlings. About nudity he said that he was confident about his body now, if not while filming KYD:

“It’s definitely a lot easier on film than it is on stage.I’m not too fussed about the nudity stuff. If you take the job, you sign up for what you read in the script.I wasn’t nervous about the gay stuff, I was nervous about the film because I wanted to do a great job and show a lot more of what I can do.“I’m quite cool with my body, more so as I get older actually. When I did Kill Your Darlings, I was just skin and bone. I’m a lot stronger right now.”

Also in the interview, Dan said that Potter made him appear "cocky" to his peers.  But he passes this off as defending himself against bullying:

''If somebody picked on me, I'd say something back to them and I think that probably came across as cocky. So I didn't do myself any favours, but I'm not just going to sit there and take it.''


In other Dan news, his Kill Your Darlings co-star Dane DeHaan has announced some rather great news: