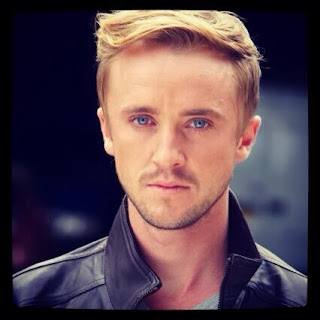 It was his birthday last Sunday and there was plenty of twitter action for Tom fans!
Tom recently shot with photographer Ricky Parker for Bello Mag who tweeted Tom was a "very nice chap".
The mag also posted a behind-the-scenes image which can be seen left and they have also tweeted that the  "tom felton obsession issue will be available first week of october".

In other twitter action, many fans posted videos etc wishing Tom a happy birthday which he greeted with gratitude:

For all your love and birthday wishes I am endlessly grateful, thank you for support and always being there x #bestfansintheworld

He celebrated his birthday with his three best gals, at least his tweets seem to say so, Mama Felton, girlfriend Jade and of course Timber:

Big thanks to my amazing girlfriend and @HerbertWoods for an u unforgettable weekend cruising the Norfolk broads.

He posted a few pictures; one of Timber, one of himself in shadow with the lovely water and one of his mum's card.

If you want to see some fan stuff head here and here.

Audience tv also tweeted that their Facebook page would have updates on Full Circle so get liking them!

Finally just a few Tom tidbits, according to Canadagraphs, Tom got an A+ rating for fan interaction while at Toronto Film Festival, well I expected no less! Also, just to note, there will be a new exclusive hand-held digital device for wb studio tour which will be voiced by Tom. Check out the trailer below: