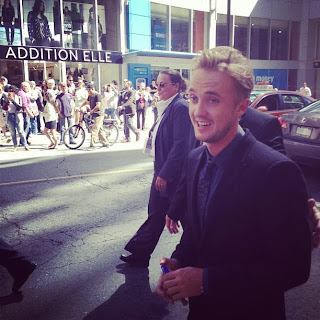 Tom Felton has attended the Belle premiere in the last few hours at the Toronto Film Festival. Reviews,videos and pictures are still coming into us at Danaholics,but above is just one image of the star arriving to wet your appetite courtesy of Feltbeats.

UPDATED:
Since our post last night plenty of pictures and a few videos have come in as well as a review of the film.

More pictures are in our galleries (and more in Feltbeats Galleries) and a review can be read here.
Furthermore, pictures of Tom at a Therese afterparty here.

There is MTV video where Tom talks about his love of One Direction, which US readers can view here.
Unfortinately the other videos from MTV are US only, but we are working on getting international copies.

Also on the Belle Toronto promotion, a live press conference will begin on TIFF's youtube account here in:
4 hours, 18 minutes and so many seconds.

UPDATED X2:
Feltbeats have posted a video of the introduction to the film and the Q&A that followed and this can be viewed below: