Dan Radcliffe's been on the interview circuit lately with Toronto Film Festival and a couple more videos are below in which he discusses Kill Your Darlings , The F Word and even Season 2 of A Young Doctor's Notebook:


On the note of  A Young Doctor's Notebook, new on set videos from Season 1 have emerged. You can see them here and here.

In other interviews, Daniel Radcliffe spoke to Entertainment Weekly about Harry Potter, Horns and Frankenstein. Some snippits are below:

ENTERTAINMENT WEEKLY: Two years removed from Harry Potter and the Deathly Hallows: Part 2, which capped a decade of eight movies that grossed more than $7.7 billion worldwide, do you find that the industry still sees you as that character, and do you find that frustrating?
DANIEL RADCLIFFE: On the whole, no is the answer to that question. Occasionally you’ll get some script in for some crappy fantasy thing and you just go, “Well, no, guys.” But generally speaking, I think the fact that I’ve shown a willingness to stretch myself and test myself means that people want to test you. So, no, I don’t get frustrated by that because it hasn’t — so far, at least — been an issue.

In Horns, you play a character who’s suspected of murdering his girlfriend and then wakes up to find devilish horns growing out of his head. It’s a movie that seems to be having a little fun with Harry Potter and the fame of playing him.
Probably Alex [Aja] snuck some stuff in there that I wasn’t aware of. I think it’s mostly happenstance, stuff like obviously the snakes being a huge part, and the fact that I’m wearing red and gold. I think there were just a lot of things in this film that already existed, but take on a slightly richer meta layer when I’m cast in the role. 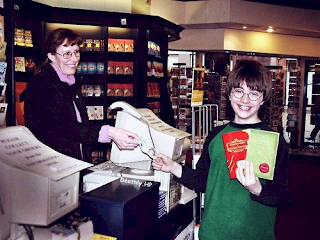 He also spoke to PopSugar about writing his own script:


PS: Do you have plans to work in film outside of acting?
DR: I have written a script. I’ve completed it; I don’t know if it’s any good, but it’s certainly nice to have finished something. That’s a huge achievement for me at this point. It’s a very, very dark comedy. There’s always themes I’m really interested in. They are themes that aren’t dissimilar to [Kill Your Darlings], about friendship and when a friendship becomes unhealthy and what you have to do to move on from that. But it’s a much more heightened scenario. It’s probably sh*t! But the point is, I’ve finished it, and the next thing I write won’t be!

Finally, in wake of news of a Fantastic Beasts and Where to Find Them film,Snitchseeker are saying that Even  Daniel Radcliffe is a big fan of @jk_rowling's #FantasticBeasts! They posted a real old image (above) of him buying his copy.
Posted by Admin, Niamh, Danaholics Anonymous at 1:08 PM