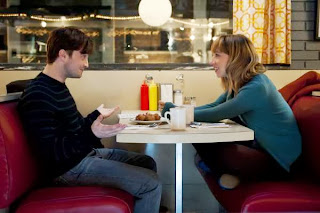 A few days ago, we THOUGHT we had posted this on the twitter (whoops!) and our admin Niamh was too busy to make a post, so here it is! Snitchseeker are reporting that the Toronto Film Festival, which will be premiering The F Word along with all 3 films Dan Radcliffe made last year, posted a new image of Dan as Wallace in the F Word. As you can see left, the image depicts Wallace with his crush Chantry, played by Zoe Kazan, who's friend-zoning is the subject of the film. A short bit of quote and info from Dan was also provided and can be read below:

Wallace is quick-witted, warm-hearted, overtly cynical but quietly romantic. His mind is a bottomless reservoir of anecdotes, observations, and semi-absurd theories. He dropped out of med school and now writes software manuals in a fluorescent- lit cubicle - not exactly what he imagined he’ d be doing, career-wise. He always wants to do the right thing, but he keeps finding himself in these ethically murky situations. He believes love is not an excuse for acting like a jerk — he’s not a fan of lying and cheating and manipulating and hurting other people. His heart got broken not too long ago but he’s getting over it – or at least trying. Wallace can talk about anything with anyone for any amount of time but he’s never met anyone he liked talking about anything with more than Chantry.
Daniel Radcliffe read the script and was drawn in by the character of Wallace as well as the wit and heart of the story. “One of the reasons I was so keen to make this film is in a part in the script, Wallace corrects Chantry on her pronunciation of a word. At that point I knew I liked this guy,” says Radcliffe of his character. “He’s slightly reclusive and not really that social but he very much wants to be included. He’s a very sweet guy but a bit misguided in the way he views relationships as black and white but that’s kind of an interesting thing about him. He’s interesting, complicated and also very funny.”
As romantic comedy is a new genre for the acclaimed actor, Radcliffe was excited about jumping into the role. “Usually when I make a film there is always one scene where my character breaks down and has some terrible thing happen to him and with this film there wasn’t any of that,” says Radcliffe. “It’s a lighter film for me – not necessarily emotionally – but in terms of the depths of pain and agony I have to go to. It’s been very enjoyable – I hope to do more comedies in the future.”
“When I met [director] Mike Dowse it was clear that he had a real vision for the movie. He lets us play around and encourages us to improvise,” says Radcliffe of the director.
As Dowse explains, everyone expected a great actor in Radcliffe but the level of comedy he brought was a pleasant surprise to all. “The nice surprise about Dan was that he really is funny. Obviously it’s a comedy so we were looking for someone who could do comedy but he’s surpassed my expectations of how great he is on his feet, with improv and coming up with great bits,” says Dowse.