Rupert Grint set to get his Gangstar Mojo? New Photoshoot 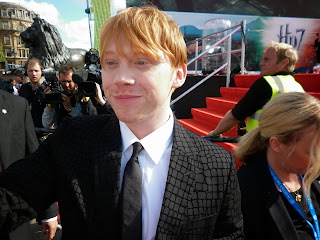 Redtops like the Daily Mail broke the story that Rupert Grint was alledgedly 'in talks' to make his West End debut in gangstar drama Mojo.
Now Rupert Grint US are saying that:


Rupert‘s representatives, although they are not ready to make any confirmation on the news, they do say that he is in talks to star in the play.

Exciting stuff! Apparantly, Rupert has already done a reading with fellow actors Ben Whinshaw and Cherrybomb and Misfits favourite Robert Sheehan. In case you havent heard about this before, here's a quick synopsis:


The drama is set in a lowlife club in Soho in 1958 and focuses on a handsome rock singer with star potential who gets caught up in uncouth goings-on involving a gangster, club owner and band manager.


In other Rupert news, "#TheNecessaryDeathOfCharlieCountryman will be screened twice on Saturday July 13 at the Odessa Intern. Film Festival". For more info check it out here.

Finally, Rupert did a photoshoot just a few days ago with Charlie Gray in which he posed with another Potter alumni, Helen McCrory (Narcissa Malfoy). No pictures or further info have emerged yet but we'll keep ya posted!

Posted by Admin, Niamh, Danaholics Anonymous at 12:45 AM