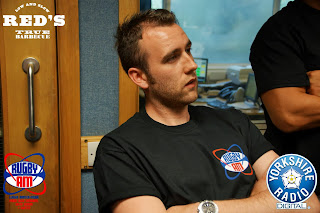 As we previously reported, Matt Lewis appeared on the Leeds airwaves on Rugby Am, yet there is still no audio, however there are pictures (one left) and a new interview with Vulture Magazine.
In the interview he talks about Wasteland and that little documentary he's involved in that we told you about. We assumed it was in a voice-over way he was involved but not so sure now!

Did you and your new castmates [for Wasteland] get together before you filmed to build a camaraderie?

We absolutely did. It was one of the first things Rowen [Athale, the writer-director] said to me in our first meeting. He said he’d written the script, but from his own perspective — there is only so much dialogue you can write, especially when it comes to that kind of banter [in the movie], which comes really naturally. So there was a lot of ad-libbing we did together. Rowen was very keen on us improvising some scenes and wanted us all to be good pals. I think a lot of the budget went to us drinking before shooting. We went around Leeds, I had a few of the lads over to my house to play poker and have a few beers. Just becoming familiar with each other, really, so when we had these scenes we could take the piss out of each other and be as comfortable and funny as possible.


You tweeted very mysteriously recently about lending your voice to a new documentary, Knight’s Club.

What more can you say about that? It’s going to be on BBC, it’s about the medieval reenactments in France every year. But it’s not just dressing up and having a bit of fun — it’s full combat with swords and shields and full armor. There’s broken bones and blood and it’s insane. This year, Team U.K. entered for the first time. It’s about these four guys from very different backgrounds and parts of the U.K. who come together to make this first-ever team. They get a bit of a battering, but it’s very fun.

Check out the full interview here.

There is also a new Wasteland featurette which can be seen below:


More info about the UK release of Wasteland can be read in the Matt part of this post.
Source: MatthewLewisCom
Posted by Admin, Niamh, Danaholics Anonymous at 7:32 PM