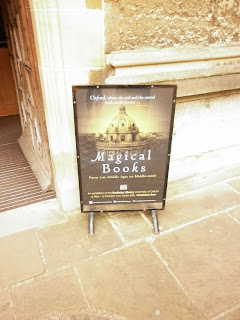 While over in London visiting the West End to see Daniel Radcliffe's play, I (the admin Niamh), decided to go see the exhibition in Oxford which held (for a brief period) the annotated copy of Harry Potter and the Philosopher's Stone which recently sold for £150,000 due to the notes and drawings by Rowling. The exhibition also contained artefacts from other magical stories such as The Chronicles of Narnia and the Lord of the Rings Trilogy.

As regards the exhibit as a whole, which was free, the content was superb. However, on the JK Rowling content, just the book, it was a tad disappointing. The book, unfortunately, was open on the same page that is easily available online to view, the title page. Given the transport costs to Oxford I hoped that maybe one of the mentioned "24 drawings" would be viewable. Yet as the exhibition was great overall and there is no cover charge, this is reasonable. 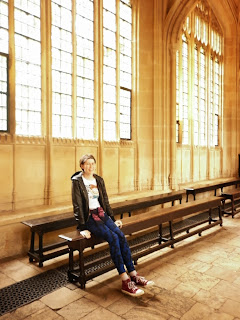 While seeing this exhibit, I also checked out the Bodleian Library and the Divinity School used as Hogwarts Library and the Hospital Wing in the Potter series, respectively. An image of me sitting as if impatient to dance while practicing for the Yule Ball is right. The £1 for the hospital wing is reasonable as the information given by the tour is interesting, but there are a few small downsides to the visit to the library. £5 is reasonable to visit both the hospital wing and the library, however there is no pictures allowed and you don't get to walk around the library. These two limitations are related by the staff to the fact the library is still functioning, however it would not be a problem due to the small tour numbers if these people were strictly watched and asked to remain quiet.
Posted by Admin, Niamh, Danaholics Anonymous at 10:54 PM